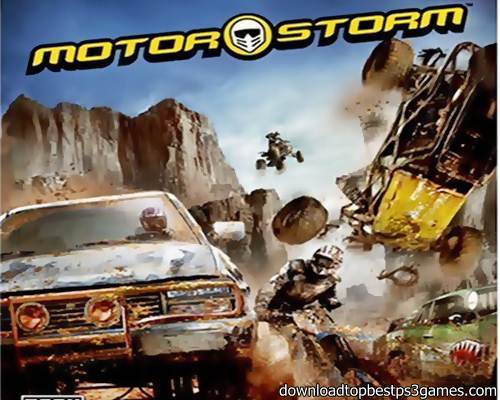 This PlayStation 3 video game is a racing game in ISO and PKG format. The game was published in March 2007. MotorStorm game was released by Sony Computer Entertainment and Developed by Evolution Studios. The system of this game is based on the off road racing. Basically the aim of this PS3 video game is to win the series of off-road races to be the champion of the festival. The players can choose from seven kinds of different vehicles Mudpluggers, Bikes, ATVs, Buggies, Rally Cars, Big Rigs, trucks in this game. Every vehicle in the game has its own unique skills, powers, strengths, and weaknesses.

MotorStorm PlayStation 3 ISO and PKG game feature seven different kinds of cars and other vehicles. This game holds Guinness world record for the biggest different variety of bikes, cars, and other racing vehicles in the racing game. Multiplayer and single-player modes are available in this video game. In 2012 multiplayer online mode is shut down permanently from MotorStorm game. This game was sold over 3 million games worldwide in 2011. In the game, the user has to choose a special car or other vehicle types in every race to compete against the vehicle or other cars. Every track has some different ways to complete. Every type of track requires a special kind of car or vehicle for making the race field further. Many events are featured in this ps3 racing game just like tire marks, mud effects, and crushes. these features make the game more realistic and good.

Route field highlights different kinds of the jump, mud pits, bumps, ledges, cliffs, parts from other cars or vehicles, and many other obstacles. In this video game, nine playable tracks are available. Races are normally 3 lap events. Two to fifteen racers are available to compete. In this game, every stage is different from the last. Large cars or vehicles such as mud pluggers and rigs can leave ruts and create a large hole.

More Info: – I hope friends you will get your favorite game MotorStorm video game for your ps3. We are regularly uploading new best ps3 and more other games on this website. If you want any other game for your ps3 then just leave a comment in the comment section.