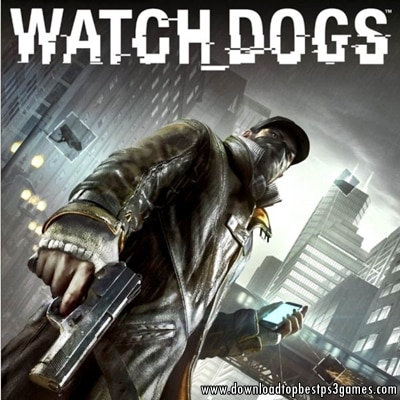 Watch Dogs: – Watch Dogs 1 PS3 ISO game is an action-adventure game, published in May 2014, for all gaming platforms, developed by Ubisoft Montreal and released by Ubisoft. You also play this game on single-player and multiplayer mode’s. Watch dogs PS3 iso game received good reviews from critics and other platforms. Critics praised from its high graphics, sound quilty and gameplay.

The main character is Aiden Pearce. He is a hacker and hacks into the electronic device, cars, mobile phone, and all other items. Overall this game is the best adventures game. Watch Dogs also available in ISO and PKG format for jailbreak ps3 gaming console. Watch Dogs ISO game is the biggest commercial success and sold over 10-million copies. It was able to break the record for the biggest 1st-day sales of a Ubisoft game.

In this action-adventure ps3 game, you can control hacker Aiden Pearce. He uses is the mobile phone to control traffic lights, security cameras, trains, and all security systems. It is set in fictionalized “Wendy City” of Chicago. The day and night cycle system also available in this PlayStation 3 game, which changes the behavior of non-player characters. There is a slow-motion system for a gunfight, and the users can use proximity IEDs, grenades, and electronic lures.

More Info: – I hope friends you will get Watch Dogs PS3 iso game. We are regularly uploading new best PS3 games on this website in DVD, ISO and PKG format. If you want any other game for your jailbreak PS3 gaming console, leave a comment and please join our Facebook group and follow on Twitter.

my watch dogs is taking infinite loading in ps3

Did it open with you??