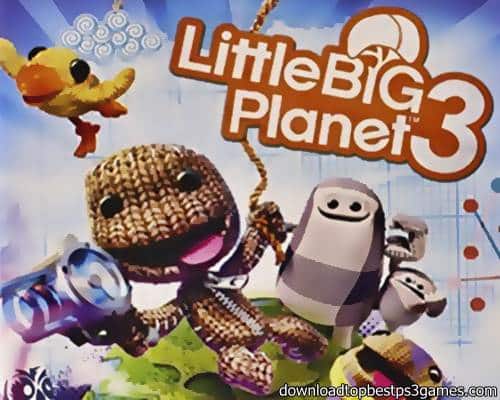 Little Big Planet 3 PS3 ISO and PKG game is based on action, adventure, and Puzzle. This video game is published in November 2014, and also available for PS3 and PS4. LittleBigPlanet Three is the third main title in the series of LittleBigPlanet games. LBP 3 is the 1st game of this series that supports the preloading of the game patches. The game is released by Sony Computer Entertainment and developed by Sumo Digital for PS3,  PS4 gaming consoles.

The gameplay of this action-adventure game is developed around along the vibrant and colorful stages with a set chamber. In gameplay, the user can swim, jump, run, swing around the things, grab the objects, use powers, and combat with enemies. The user has to complete the main mission of the game and has to find the collectibles, items, gadgets, and stickers. The game shows the same gameplay elements as of 1st 2 games of the series. Its a puzzle performing game, so the elements of sandbox games are featured. The payer can create their own levels, stickers, cars, items, playable characters, tools, decorations, player homes, etc and you can share your creations with other users. Little Big Planet 3 PlayStation 3 shows many new characters, including Swoop, this character similar to a bird. This character can pick up light items flying through the stages.

Another character is Sackboy. This amazing character has its own unique powers, skills, and abilities.  The next character is Oddsock, he looks like a dog. He runs very fast and he has the power to perform a wall jump. I also play it on my console and I like this game. The graphics quality and sound quality are very nice as a comparer to the previous game of the series. Some new customization features are added to the game by developers in this game.

More Info: – We hope friends you download your best-loved PlayStation 3 game Little Big Planet 3. We are daily uploading new top and best ps3 games and tools on the website. If you want any other game or tool for your ps3, leave a comment in comment section with the game name.